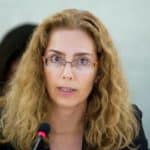 Allow me minister before concluding to say that recently I was informed as President of the Human Rights Council about a media campaign which is taking place in your country, identifying and threatening representatives of civil society who came to Geneva to participate in this review.

Given these press reports I would like to express my concern at those incidents, reminding you that intimidation is inconsistent with the spirit of democratic participation, which inspires this universal periodic review and this mechanism in the council.

For this reason I simply wish to remind you that we are all duty bound to ensure that nobody is persecuted on his return to his country for having participated in meetings of the human rights council or other bodies.

In this connection we hope the government, as you yourself have mentioned Mr. Minister will genuinely involve all civil society interested in the implementation of the recommendations of this second review.

I am making this appeal on the basis of a decision of this council which is quite clear in paragraph 30 in establishing the fact that the council energetically rejects any attempt at intimidation or reprisals against persons or groups cooperating or having cooperated with the United Nations, their representatives and their human rights mechanisms.

We urge states to prevent such acts and to provide adequate protection in that respect. I remind you of the fundamental role played by civil society in the work of the council and of course exercising freedom of expression, assembly and association, which is pivotal to the promotion of human rights and which at times, can include criticism of government action.

Thanks to all of the commitments I have heard about in this proposal I express full confidence in the senior delegation with us today because I know that it will offer all guarantees to those persons identified in the press.

That is the information that has been checked on by the United Nations Services. Allow me and I shall give you the floor in a moment to say that irrespective of this information I wish you every success in Bahrain in implementing these recommendations and in this national process that you are currently building.

I hope that you can strengthen confidence amongst the entire Bahrain population, I wish you every success and of course I now give you the floor Minister.

Thank you Madame President. Excellencies, I would like to reiterate once more that as you have just said and after the statement I made myself that there is no party threatening any person having participated in any meetings of the human rights council.

What you have said I believe reflects unfounded allegations. We would like to reiterate our full respect for the human rights council, however today there are also representatives of the civil society of Bahrain here, it’s human rights institutions and these persons enjoy free rights to travel, may travel from one country to another in all freedom.

They benefit from all their basic rights and enjoy those rights and I can reiterate what I have just said and indeed I can put forward evidence of the enjoyment of these rights by the civl society.

The information that you have just communicated we believe to be unfounded and I would like to know which party communicated that information to you. If those parties have any proof of what they are alleging I would like to look at these allegations myself. We reject such allegations; we have entered a new phase in the history of our country, a new era, which respects human rights, as I said in my statement.

Thank you for your understanding.

Minister I am just sharing press reports with you, I am not saying that these are government threats. My intention was called to the fact that the state does guarantee of those persons who have been intimidated while mentioning that they have been involved in this UN conference.

That is the obligation of the government of state, vis-à-vis threats from third parties. that is the only announcement I would like to make.

Thank you Madame President, a point of order please. On the issue of referring to the names of members working for NGO’s, this is not at all in keeping with the rules and procedures of the council, thank you.

Given that the Council has committed to combating reprisals we do feel duty bound to provide guarantees for protection of those persons, thank you for your understanding.

Thank you Madame President. Allow me to congratulate the working group and Bahrain for this draft report. We have just heard the declaration made by the President, this is the first time that in this hall, in this council, issues such as this are referred to and these are issues that relate to the sovereignty of states.

This is a precedent in the work of this body, the work of which usually consists of examining and adopting reports. We are not now called upon to review the working of the human rights council and this is why we hope that the discussions and the adoption of the reports will keep to the procedures as they are usually followed.

We therefore request that no such statement be made, even less so coming form the President. It is not up to us to address issues, which do not relate to the Universal Periodic Review or the reports submitted to this council. Thank you.

Thank you, you will have noted that this was intended to indicate the concern of the Council as a whole and not simply of the President.

Thank you Madame President we are speaking on a point of order. We also share the concern of the previous delegations and we request that you not interpret your role and speak on behalf of the council. The council is made up of member states, if you have any personal position on any issue then that position should be expressed in keeping with rules and procedures. Above all the rules and procedures of the universal periodic review. Thank you.

Thank you distinguished representative of Belarus, I now give the floor to Kuwait.

Thank you Madame President. I would like to address the delegation of Bahrain first and foremost and congratulate it on the report that was presented to us.

We also state that your declaration Madame President is a precedent in this council. We believe that this report was drafted by the government, an official report which associated other parties in it’s drafting as well and this is why we believe that it is necessary to respect of course the rights and liberties who were referred to as well.

Thank you. I do not believe that this is a precedent but at any rate this is a recent decision of the council that dates back to 2011 and I based myself upon that decision. Quite simply I wish to renew my expression of confidence that there will be no kind of problem involved with this and wish the country to continue with its national implementation process, a most valuable and democratic participatory process, this which we hope we will be benefited from by the entire society of Bahrain, so that the entire population can feel united and reconciled as all society and peoples deserve, this is our most sincere wish, thank you very much.