☼ Born on25 August 1958, in Burbank, California, USA
Biography Timothy Walter Burton was born in Burbank, California, to Jean Rae (Erickson), who owned a cat-themed gift shop, and William Reed Burton, who worked for the Burbank Park and Recreation Department. He spent  (click to expand) most of his childhood as a recluse, drawing cartoons, and watching old movies (he was especially fond of films with Vincent Price). When he was in the ninth grade, his artistic talent was recognized by a local garbage company, when he won a prize for an anti-litter poster he designed. The company placed this poster on all of their garbage trucks for a year. After graduating from high school, he attended California Institute of the Arts. Like so many others who graduated from that school, Burton's first job was as an animator for Disney.

His early film career was fueled by almost unbelievable good luck, but it's his talent and originality that have kept him at the top of the Hollywood tree. He worked on such films as The Fox and the Hound (1981) and The Black Cauldron (1985), but had some creative differences with his colleagues. Nevertheless, Disney recognized his talent, and gave him the green light to make Vincent (1982), an animated short about a boy who wanted to be just like Vincent Price. Narrated by Price himself, the short was a critical success and won several awards. Burton made a few other short films, including his first live-action film, Frankenweenie (1984). A half-hour long twist on the tale of Frankenstein, it was deemed inappropriate for children and wasn't released. But actor Paul Reubens (aka Pee-Wee Herman) saw Frankenweenie (1984), and believed that Burton would be the right man to direct him in his first full-length feature film, Pee-wee's Big Adventure (1985). The film was a surprise success, and Burton instantly became popular. However, many of the scripts that were offered to him after this were essentially just spin-offs of the film, and Burton wanted to do something new.

For three years, he made no more films, until he was presented with the script for Beetlejuice (1988). The script was wild and wasn't really about anything, but was filled with such artistic and quirky opportunities, Burton couldn't say no. Beetlejuice (1988) was another big hit, and Burton's name in Hollywood was solidified. It was also his first film with actor Michael Keaton. Warner Bros. then entrusted him with Batman (1989), a film based on the immensely popular comic book series of the same name. Starring Michael Keaton and Jack Nicholson, the film was the most financially successful film of the year and Burton's biggest box-office hit to date. Due to the fantastic success of his first three films, he was given the green light to make his next film, any kind of film he wanted. That film was Edward Scissorhands (1990), one of his most emotional, esteemed and artistic films to date. Edward Scissorhands (1990) was also Burton's first film with actor Johnny Depp. Burton's next film was Batman Returns (1992), and was darker and quirkier than the first one, and, while by no means a financial flop, many people felt somewhat disappointed by it. While working on Batman Returns (1992), he also produced the popular The Nightmare Before Christmas (1993), directed by former fellow Disney Animator Henry Selick. Burton reunited with Johnny Depp on the film Ed Wood (1994), a film showered with critical acclaim, Martin Landau won an academy award for his performance in it, and it is very popular now, but flopped during its initial release. Burton's subsequent film, Mars Attacks! (1996), had much more vibrant colors than his other films. Despite being directed by Burton and featuring all-star actors including Jack Nicholson, Glenn Close, Pierce Brosnan and Michael J. Fox, it received mediocre reviews and wasn't immensely popular at the box office, either.

Burton returned to his darker and more artistic form with the film Sleepy Hollow (1999), starring Johnny Depp, Christina Ricci and Casper Van Dien. The film was praised for its art direction and was financially successful, redeeming Burton of the disappointment many had felt by Mars Attacks! (1996). His next film was Planet of the Apes (2001), a remake of the classic of the same name. The film was panned by many critics but was still financially successful. While on the set of Planet of the Apes (2001), Burton met Helena Bonham Carter, with whom he has two children. Burton directed the film Big Fish (2003) - a much more conventional film than most of his others, it received a good deal of critical praise, although it disappointed some of his long-time fans who preferred the quirkiness of his other, earlier films. Despite the fluctuations in his career, Burton proved himself to be one of the most popular directors of the late 20th century. He directed Johnny Depp once again in Charlie and the Chocolate Factory (2005), a film as quirky anything he's ever done. 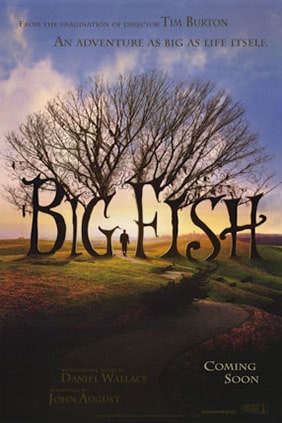