☼ Born on7 April 1939, in Detroit, Michigan, USA
Biography Francis Ford Coppola was born in 1939 in Detroit, Michigan, but grew up in a New York suburb in a creative, supportive Italian-American family. His father, Carmine Coppola  (click to expand) , was a composer and musician. His mother, Italia Coppola (née Pennino), had been an actress. Francis Ford Coppola graduated with a degree in drama from Hofstra University, and did graduate work at UCLA in filmmaking. He was training as assistant with filmmaker Roger Corman, working in such capacities as sound-man, dialogue director, associate producer and, eventually, director of Dementia 13 (1963), Coppola's first feature film. During the next four years, Coppola was involved in a variety of script collaborations, including writing an adaptation of "This Property is Condemned" by Tennessee Williams (with Fred Coe and Edith Sommer), and screenplays for Is Paris Burning? (1966) and Patton (1970), the film for which Coppola won a Best Original Screenplay Academy Award. In 1966, Coppola's 2nd film brought him critical acclaim and a Master of Fine Arts degree. In 1969, Coppola and George Lucas established American Zoetrope, an independent film production company based in San Francisco. The company's first project was THX 1138 (1971), produced by Coppola and directed by Lucas. Coppola also produced the second film that Lucas directed, American Graffiti (1973), in 1973. This movie got five Academy Award nominations, including one for Best Picture. In 1971, Coppola's film The Godfather (1972) became one of the highest-grossing movies in history and brought him an Oscar for writing the screenplay with Mario Puzo The film was a Best Picture Academy Award-winner, and also brought Coppola a Best Director Oscar nomination. Following his work on the screenplay for The Great Gatsby (1974), Coppola's next film was The Conversation (1974), which was honored with the Golden Palm Award at the Cannes Film Festival, and brought Coppola Best Picture and Best Original Screenplay Oscar nominations. Also released that year, The Godfather: Part II (1974), rivaled the success of The Godfather (1972), and won six Academy Awards, bringing Coppola Oscars as a producer, director and writer. Coppola then began work on his most ambitious film, Apocalypse Now (1979), a Vietnam War epic that was inspired by Joseph Conrad's Heart of Darkness (1993). Released in 1979, the acclaimed film won a Golden Palm Award at the Cannes Film Festival, and two Academy Awards. Also that year, Coppola executive produced the hit The Black Stallion (1979). With George Lucas, Coppola executive produced Kagemusha (1980), directed by Akira Kurosawa, and Mishima: A Life in Four Chapters (1985), directed by Paul Schrader and based on the life and writings of Yukio Mishima. Coppola also executive produced such films as The Escape Artist (1982), Hammett (1982) The Black Stallion Returns (1983), Barfly (1987), Wind (1992), The Secret Garden (1993), etc.

He helped to make a star of his nephew, Nicolas Cage. Personal tragedy hit in 1986 when his son Gio died in a boating accident. Francis Ford Coppola is one of America's most erratic, energetic and controversial filmmakers. 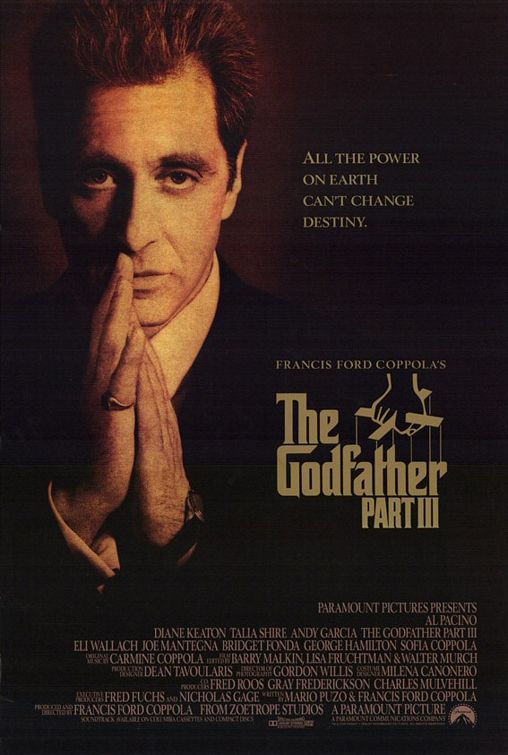